Restaurant veteran Greg McKinstry ceremoniously cut the ribbon at the grand reopening of his McK’s barbecue with a simple summary: “Same great barbecue. Just a nicer place to eat it.

What’s new is the name (it used to be “McK’s Chicks”)… the façade and the branding… the interior decor (reclaimed barn wood, black walnut bar top, corrugated metal accents )… Alcohol (beer, bourbon slushies)… and meals inside (one of tables and chairs inside to accompany those outside).

What’s the same is the authentic and fabulous McKinstry barbecue (with a few unique twists), as well as the classic sides – collard greens, ‘drunk’ beans, and more.

By the way, this meat is smoked in two drum smokehouses every morning in the alley next to the restaurant at 11 West Seventh St.

(And yes, because we know you’re going to ask, McK’s BBQ still features their signature “Pork Grenade,” which won the 2019 Taste of Cincinnati award for best entree.)

City of Covington officials helped McKinstry, his family and building owner Eric Steiden of Madison Ventures cut the ribbon in a short ceremony. McKinstry thanked the city for helping him obtain special permits for smokers, and his customers for being patient.

The restaurant – which opened in 2017 – decided to close during the throes of the COVID-19 pandemic for a facelift, and although the renovation took a little longer than expected, McKinstry said critics since reopening were worth it. “People have had fantastic and positive things to say,” he said. 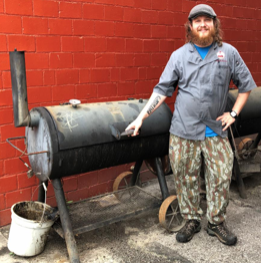 Located between the Covington Hotel and Braxton Brewing, the restaurant was in high demand for dining, McKinstry said. Previously, it was mainly open for take-out and catering.

Vice Mayor Ron Washington told McKinstry he appreciates both the barbecue and the long hours such a business demands. “This is what makes our city unique – its small businesses,” Washington said. “You are the heart and soul of Covington.”