On Thursday’s episode of ‘The Daily Show,’ Trevor Noah laughed at British Prime Minister Boris Johnson’s farewell speech to Parliament, which ended with a quote from ‘The Terminator’ .

Johnson resigned from his post earlier this month after dozens of resignations from his government, including two of his top officials. Speaking to MPs for the last time on Thursday, he gave some somewhat chaotic advice to the next Prime Minister before concluding his speech by saying: “Hasta la vista, baby!”

“This is Shakespeare and Jane Austen country and the quote Boris chose was from ‘The Terminator’?” Noah said after having a good laugh over an excerpt from Johnson’s speech. “I mean, I guess it shows you the power of American culture. Even the prime minister of the UK is like, ‘Farewell and good luck, okurrr?’ »

The end of Johnson’s speech isn’t the only part that made Noah raise his eyebrows. In fact, last night’s host had questions about the entire monologue.

“Normally when you give a speech, especially about a resignation or a dismissal, you surely want people to regret it,” he said. “Like when you’re giving the speech, you want people to be like, ‘Ah man, did we make the wrong call? “”

Noah used President Barack Obama’s farewell speech as an example, saying “even the racists in America were like, ‘Maybe he was one of the good guys.'”

“This guy is giving a speech and you’re like, ‘How did he get the job? Did he win a competition or something?'” he joked.

You can watch the full video above. 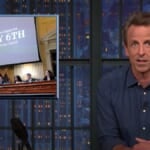